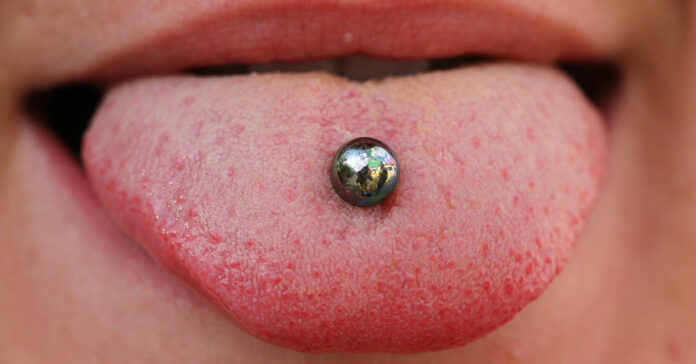 A woman in her 20s gets a tongue piercing. A month later she develops a brain abscess. Doctors believe that the brain infection is secondary to tongue piercing!

A 22-year-old female got a tongue piercing. The next day her tongue started to swell, and she started to have pain. Moreover, gradually, she felt an ill tasting discharge from the pierced site. She decided to remove the jewellery. Thereafter the symptoms resolved.

She had no fever, chills, or sweats; therefore, she did not seek any professional help.

No later than 4 weeks, she presented with severe throbbing headache, nausea, vomiting, and dizziness. Her condition worsened over the next 2 days. Pain killers were not helping her headache; therefore, she decided to seek medical attention.

She had a history of recreational inhaled and injected cocaine and heroin but had not used any injection for the past 5 months.

Examination did not reveal tongue swelling, redness, or pus. The piercing was not visible either.

The doctors decided to perform a neurological examination. They found mild balance problems and mild ataxia during left-sided heel-to-shin testing.

Cerebellum, also called the little brain, is a part of the brain that is responsible for coordination, balance, precision and timing of movements. Infections of the ear or sinuses are known to migrate to this part of the brain and form abscesses.

Richard Martinello, M.D., of the Section of Infectious Diseases in the Department of Internal Medicine at Yale School of Medicine, said: “The bacteria that caused the abscess in this patient were those typically found in persons’ mouths. We conclude the abscess potentially arose secondary to the tongue piercing associated infection.“

The surgeons drained the abscess and started her on antibiotics for 6 weeks, intravenously. She made full recovery. Although she had some complications due to antibiotic use, those adverse effects resolved shortly after.