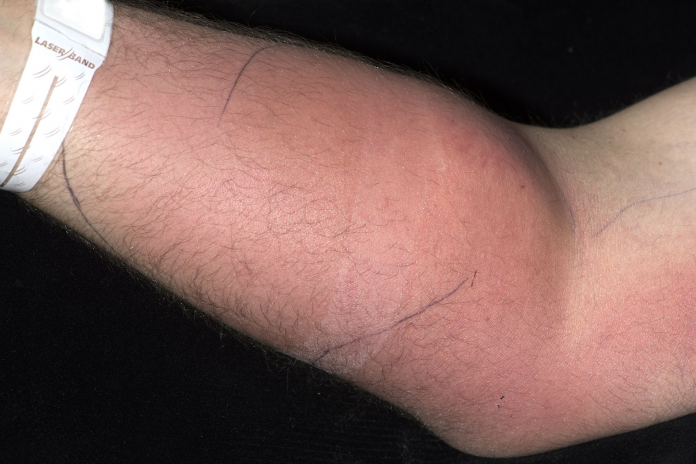 Long-term or chronic pain can range from mild to severe. Moreover, the pain often becomes unbearable to a point where people are willing to try anything from home remedies to surgical interventions to get rid of the pain. With a similar intention, a man from Dublin, Ireland, resorted to a treatment completely unheard of to treat his back pain.

In a bizarre attempt to cure back pain, a 33-year-old Irish man injected himself with his own semen for 18 months straight!

Hoping that his chronic back pain would go away, he had been regularly injecting himself with his semen till the medics found out. He would fill a syringe with his own semen and squirt it into the veins and muscles of his right arm.

What’s more, this man thought his idea was very “innovative”. When he visited the doctors complaining of severe back pain, the doctors noticed a red rash and swelling on his right forearm. His arm was infected with cellulitis because he had been injecting semen in it for more than a year and a half!

Doctors performed an x-ray to rule out any object in the man’s arm, only to find a local collection of semen!

Dr. Lisa Dunn wrote in a case study published in the Irish Medical Journal, “He had devised this “cure” independent of any medical advice”.

“He revealed he had injected one monthly “dose” of semen for 18 consecutive months using a hypodermic needle which had been purchased online.”

Before doctors had the chance to remove the semen, the man discharged himself from the Adelaide and Meath Hospital.

The semen leaked into the man’s soft tissue because of the botched injections. He “failed multiple attempts at injecting the bodily fluid”. There have been no tests on the effects of injecting semen in human veins and muscles to treat back pain.

In the past, there have been cases where people have injected substances like petrol and lighter fluid in an attempt to commit suicide. However, this case is a one of its kind.

“The dangers of [injections] when carried out by the untrained layperson are highlighted as well as the vascular and soft tissue hazards surrounding the attempted injection of substances not intended for intravenous use,” said Dr. Lisa Dunn.

There are no researches that support the use of human semen to cure pain. Earlier in 1945, human semen was injected in female rats and rabbits as part of an experiment. However, the study yielded completely negative results. This is the only past example of semen injection, which perhaps, may have misguided and inspired the man.