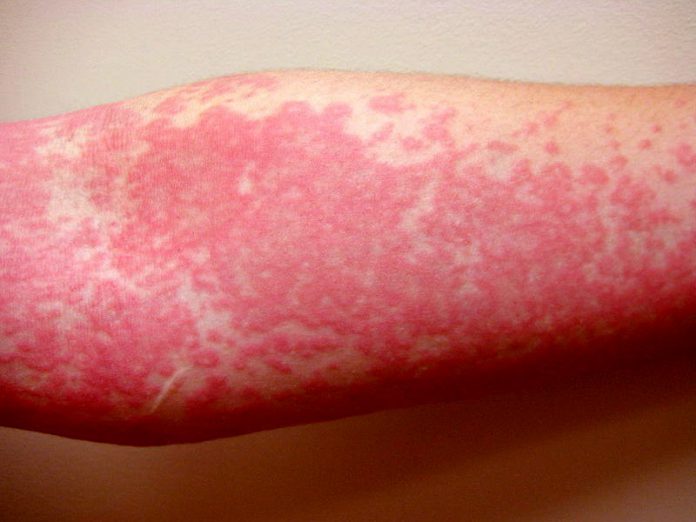 A young man aged 22 years was presented at OPD to seek medical attention for his condition. He complained occurrence of swollen, red bumps and plaques on skin. His history had a record of duodenal ulcer due to H.pylori. The ulcer was treated with course of antibiotics coupled with proton pump inhibitors. The doctors found no link between cured duodenal ulcer and occurrence of painful hives and wheels. He had no history of urticaria or psoriasis. He was not allergic to any substance or food. None of his family members or distant relatives had similar condition.

According to him, it has been 10 years since the on and off appearance of hives. He suffered from constant burning, itching and stinging pain for some time and then the skin became normal after short time span. He explained that the pale red bumps and plaques appear with erythema.

He further explains that hives and wheals appear after contact with water. It seemed as if he was allergic to water. The intensity of burning blisters and red itchy patches depended on the duration of his contact with water. As soon as he made contact with water red itchy hives and wheals appeared surrounded by erythema. If the duration of contact lasted for a few minutes the outbreak of hives and wheals remained limited. In case of any unwanted contact he would wipe away the water. Quick wiping resulted in either no rash at all or rash which lasted for few minutes with moderate burning. However, when he would swim or take a bath the hives and rashes were too intense. He complained of skin becoming red and painful. Longer duration resulted in severe symptoms. All symptoms indicated that the patient was allergic to water.

The redness and itchiness occurred on trunk and upper limbs only. Lower limbs and palms never suffered from episodes of urticaria. Usually, these symptoms lasted for 20-40 minutes. So far he had not used any medications. All the symptoms would disappear without the use of any medication. The young man informs that water of all kinds harmed his trunk and lower limbs. From tap water, distilled water, sea water to rain water and sweat, all kinds made him allergic to water and resulted in outbreak of stinging and itching bumps and plaques. He revealed a surprising fact about his condition. He mentioned that no rash, hives or wheels occurred when he would sweat during exercise or emotional distress.

Laboratory tests revealed normal IgE level. Dermographism test was performed on his forearm which resulted positive. Wet clothes were brought in contact with the patient’s trunk at temperature of 35℃. Few minutes later hives with erythema were observed which lasted for 20 minutes. The patient was asked to take shower. Water had temperature of 35℃. Few minutes later multiples wheals and hives with erythema occurred on his trunk and upper limbs.

Aquagenic urticaria, water allergy, is an extremely rare disorder. The onset is usually after puberty. The affected areas vary from patient to patient. In majority of the cases, this condition effects skin of trunk and upper limbs. Hives, rashes and wheals appear after 20-30 minutes of contact with water. They are quite painful and cause extreme discomfort to the patient. They resolve within 30-60 minutes. There are many other conditions in which skin turns red but this conditions amazes medical science. Research is going on to understand the pathophysiology of this condition.